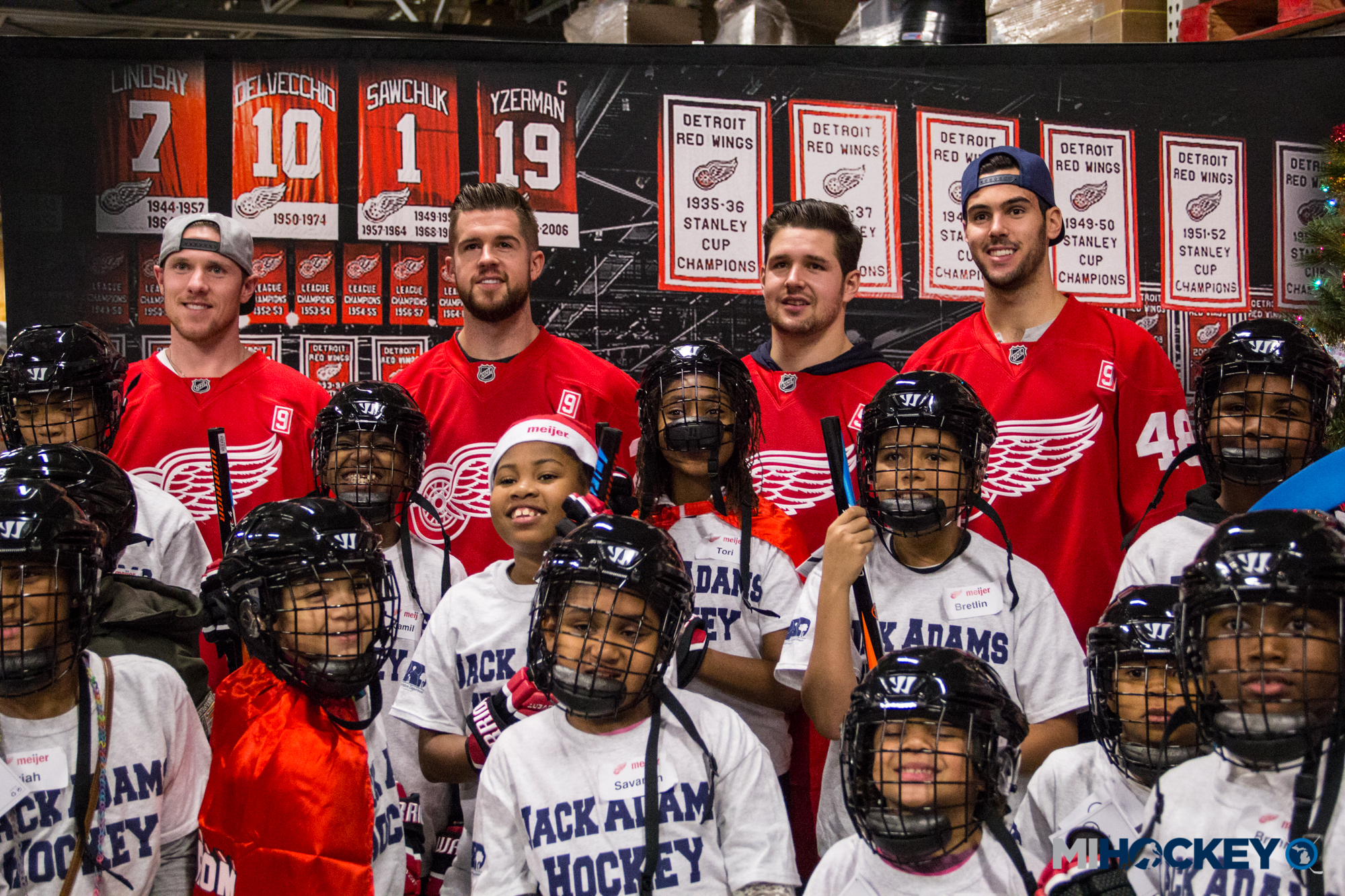 A group of young hockey players from Detroit began Thursday night giving back to fellow children in need alongside Detroit Red Wings players and their significant others.

What they weren’t aware of is the joyous surprise that followed.

Twenty kids from the Introduction to Hockey program at Jack Adams Memorial Arena in Detroit were treated to a pizza party at Meijer in Madison Heights and then went on a shopping spree with Detroit Red Wings players – Jimmy Howard, Mike Green, Xavier Ouellet and Ryan Sproul – and the Lady Wings.

But the purpose was not to find gifts for themselves, but to give back to patients less fortunate at the Children’s Hospital of Michigan.

Ouellet said it was great to see the kids’ enthusiasm for generosity.

“That was fun. I was walking around with the kids and they were all so excited to get gifts for other kids, which was kind of surprising because usually as a kid you’re thinking about yourself, but it wasn’t like that at all; they were all in the spirit of sharing and trying to get nice gifts for their friends and people they might hardly know, so it’s great to see that.”

Being the holiday season, that’s really what it’s all about, too.

“We have kids of our own and it’s an important time of year for everyone,” Howard’s wife, Rachel, said. They were just excited to shop for the kids in the hospital. They didn’t think they were getting anything else in return, and they were still excited. When they found out they got to shop for themselves and they got hockey equipment, it’s huge. It’s really, really special.”

Once the kids were done checking out, Wings defenseman Mike Green announced that they would then be receiving the chance to do it all over again, but this time, they were able to pick out gifts for themselves.

And the surprises didn’t end there; once the kids were done shopping, they learned the Wings had provided them with brand-new Warrior hockey equipment. For players who were once in the kids’ shoes – or skates, if you will – it was an especially neat surprise to give.

“That’s awesome, with the help of Warrior, that we can do that and get gear for these kids to play and live their little dreams,” Ouellet said. “It doesn’t seem like it, but equipment is pretty expensive and it’s hard to get, so it’s fun to see the kids get it and get a chance to live their dream.”

On Wednesday, Dec. 14, the Wings will deliver the purchased toys to the Children’s Hospital of Michigan as part of their annual holiday visit.

“Not gonna lie, it’s tough when you go in there and you see what the children are battling through,” Howard said. “It’s tough, especially now having children at home. You see them in that situation, you get a little emotional yourself. You never want to see anyone go through that, but to be able to go up there and give them a few moments of cheer, it’s definitely well worth it.”