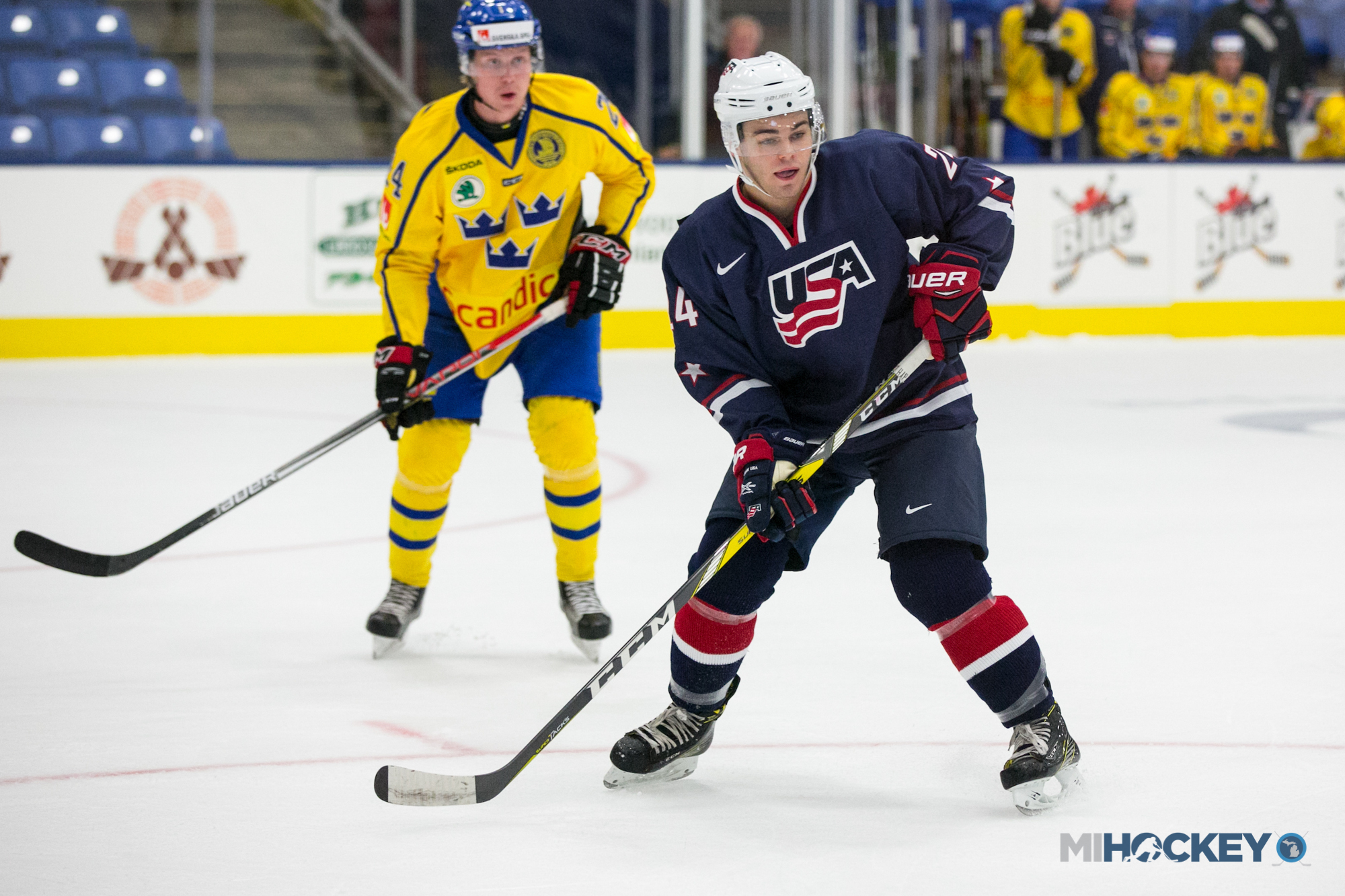 PLYMOUTH – The 2016 U.S. National Junior Evaluation Camp opened on Saturday at USA Hockey Arena in Plymouth, a rink that all of the six participating Michigan natives virtually grew up in or at least played in.

The camp, which runs from July 30 through August 6, features many of the top Under-20 players from the United States, Finland, Sweden and Canada in a series of exhibition games.

Warren, a forward with the University of Michigan, joked that it was nice he didn’t have to travel far to get to the arena.

“It’s nice, you come to this rink, see everything that they’ve done to it with USA,” Warren said. “It looks really nice, tons of upgrades, the locker rooms look amazing, and it’s just cool to be close to home. I have friends and family coming to watch so it’s nice.”

Warren added that the chemistry with his teammates through the first game, a 8-1 win over Finland, was much better than expected given most of the players hadn’t played together before.

“It was actually better than I thought,” Warren said. “I think our communication helped that a lot. On the bench, everyone was talking, on the ice everyone was yelling, helping each other out any way we could. I think the chemistry just followed that and the game took its course.”

Day – a defenseman with the OHL’s Mississauga Steelheads and a Compuware and Honeybaked alum – echoed Warren’s thoughts, saying everyone is there to make the most of the situation.

“It was awkward, but it was a lot better than I expected, too,” Day said. “We’ve never really played together, but you just go out there and with the practices and the scrimmage we had against White the other day, you just try to practice as much as you can. I think it went way better than expected for sure.”

Jones played a season of youth hockey for Compuware – the program that calls the arena home – and also took to the ice there many times as a visitor. The Anaheim Ducks’ first-round draft pick this past June said it was “surreal” wearing red, white and blue at such a prestigious event in such a familiar venue.

“I played here for Compuware U16s a long time ago and it’s just kind of cool,” Jones said. “It’s a cool situation. I was always here watching my brother [Mitch] play for the [Plymouth] Whalers here and now I’m here for the World Junior Evaluation Camp, it’s pretty surreal.”

DeBrincat also made trips back to the arena via the OHL. The second-round pick of the Chicago Blackhawks this past June has posted back-to-back 51-goal, 100-point seasons – including a Rookie of the Year nod – playing for the Erie Otters.

“It’s different; it was always the Whalers’ rink, or Compuware…they did a great job with the place, and it’s really fun to come back here and play,” said DeBrincat, who was on Team USA’s World Junior squad last year.

“I’ve never been to the summer camp before, so it’s a new experience and it’s pretty fun meeting all these new guys who I’ve never met before. It’s a good group.”

Boka, a University of Michigan defenseman, played six years for the Compuware organization, including in 2012-13 alongside Jones on the U16 squad. As a collegiate player and a U.S. NTDP player prior to the program’s move, he hasn’t made nearly as many trips to USA Hockey Arena as Jones has, so he was particularly impressed with the renovations.

“I played here for six years with Compuware – it’s amazing the changes they’ve made,” Boka said. “They’ve done a great job with this facility, turning it into something that’s gonna last a long time here.”

In addition the event being held so close to home, Jones also said how important it is for growing youth hockey in Michigan.

“I think Michigan hockey is growing; every rink I go to now, you see people on the ice,” Jones said. “It’s hard to get ice for me now because I can’t get ice to train because everyone’s always playing hockey nowadays. I think it’s things like this. People want to come watch high-end hockey because kids growing up like to see that, to see kids in the same kind of area. It’s pretty cool and pretty nice for Michigan hockey.”

Boka, a Minnesota Wild prospect, echoed Jones’ thoughts on the importance of kids getting exposed to events like these in order to grow the sport in the state.

“Just going up there watching these games and having that right in your backyard is something to strive for and have a goal for in the future.”

A teammate of Boka’s with the Wolverines, Warren said he’s seen some familiar faces around the rink, proving there’s some maintained interest from the area’s youth.

“It’s really cool,” Warren said. “I played at USA in Ann Arbor, and I’ve seen some of the kids that used to come to the games there and they’ve come to the games at Michigan and now they’ve come here, so it’s cool to see them kind of following our progress and maybe we’re role models for them. It’s kind of cool.”

Day still returns to the rink in the summer to train and skate with his friends and former coach’s Compuware teams. He said for them getting to see an event like this at their home rink makes the dream seem that much more attainable.

“Especially for the Compuware kids here growing up playing here and then hopefully getting the chance at a World Junior team or U18 team and get to play here, it’s pretty cool,” Day said.

But despite the good feelings and hometown allure, the ultimate goal is to make the 2017 World Junior Championship team.

“I think it’s awesome,” Day said of the opportunity. “You just take every opportunity that you get and you’re trying to just play your game and take the chance… I’m one of the younger guys I think, and it’s hard to make the team. Just showing that I can play whatever depth that they want me to.”

Jones said he’s cherishing the opportunity at-hand to make an impression on the USA Hockey brass for WJC team consideration.