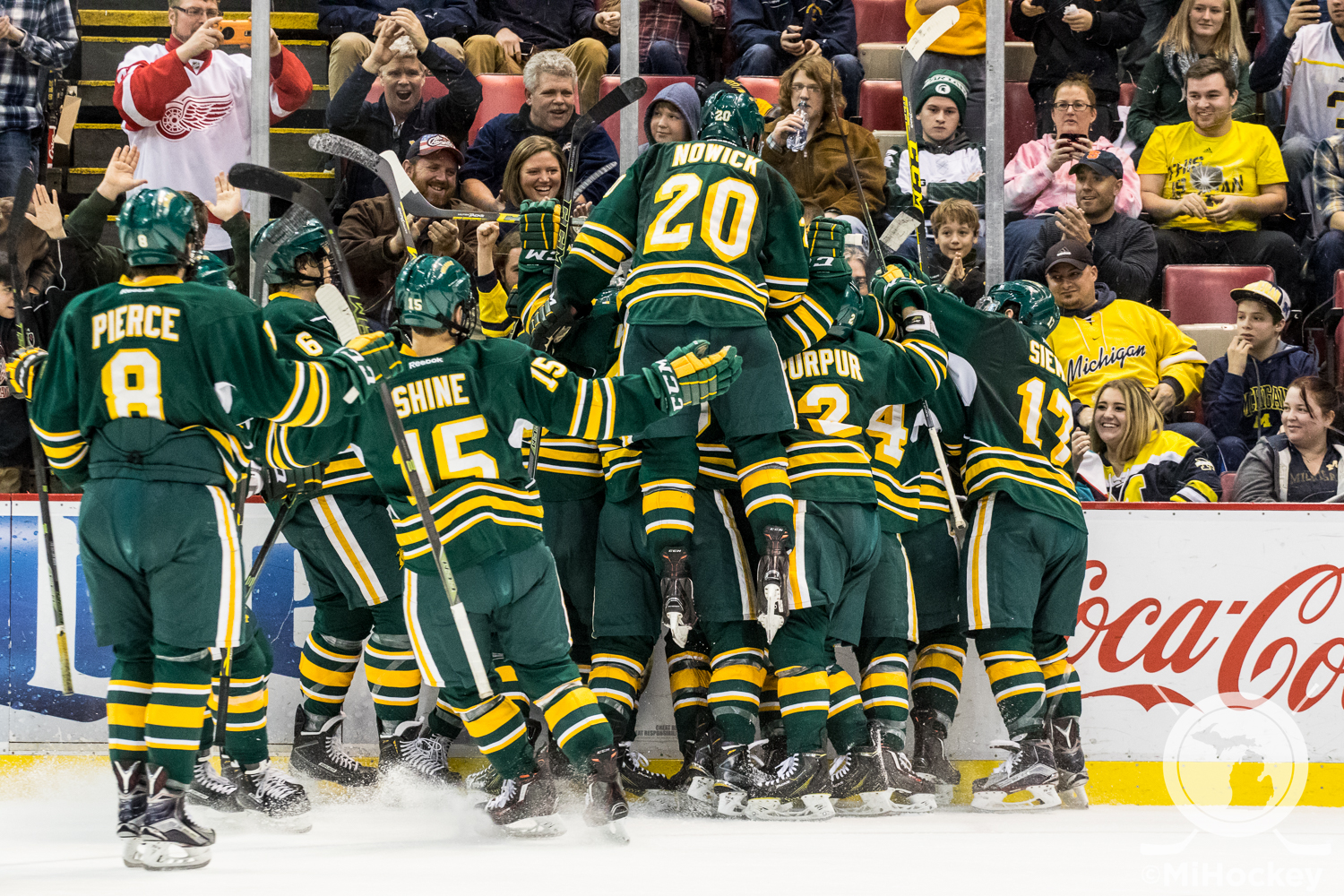 DETROIT – For the second-straight game, it took extra time to decide Michigan State’s fate at the 51st Great Lakes Invitational, once again after a blown third-period lead.

Like Michigan Tech before them, the Northern Michigan Wildcats made the Spartans pay for it, too. Joe Cox’s first-period goal had MSU ahead for most of the game, but Pinckney native Dominik Shine’s power-play marker with just under five minutes to play evened things up and forced the extra frame. Sophomore Gaylord native Robbie Payne scored the overtime winner with 1:22 left in the extra frame to seal the Wildcats’ win.

“Growing up, we always watched the GLI with family and now they get to come down here,” Payne said. “I think I had like 20 people here watching, so it was pretty good to see them and be able to score in front of them here. I got a bunch of texts right after the game, it was pretty cool.”

In addition to his praise for goaltender Mathias Israelsson, Northern Michigan coach Walt Kyle had praise for his two hometown goal scorers after the game.

“These two guys are guys that we projected to lead us in goal scoring this year and they’re right there doing that for us right now,” Kyle said.

For MSU, head coach Tom Anastos said it’s a loss that stings and will require his team to do some “soul searching,” citing the simple need to close out leads.

“Well, we’re going to have to do some soul searching. It’s a tough way to start the second half of the season without a doubt, giving up late leads and losing in overtime the way we did, it’s going to be a character check for us. I think the world of the guys in our locker room. If there’s any group that’s going to keep digging and grinding, it’s this group, but obviously we have to learn to make key plays at key times. I’m very confident this group will keep working at that.”

Anastos added he was impressed with senior netminder Jake Hildebrand, who made 55 saves overall in the two-day tournament.

Cox (Chelsea) opened the scoring at 1:06 of the first period with his sixth of the season, banging home the rebound of a Travis Walsh (Haslett) point shot.

Late in the period, a Ryan Keller hit in the NMU zone broke a pane of glass that ignited the Joe Louis Arena crowd and, after 20 minutes, MSU skated off the ice with a one-goal lead and sat tied with NMU in shots with six apiece.

A scoreless second period set the Spartans up with another third-period lead to defend.

Israelsson came up with a big stop on a MSU 2-on-1 with eight minutes left in the third period to keep his team at a one-goal deficit. Seconds later, he made a another similar 2-on-1 save, equally as important.

Brennan Sanford (East Lansing) took a boarding minor with just under six minutes to play, setting up a Wildcats man advantage, an opportunity they would not squander. Shine tied it up for NMU with just under five minutes to play, burying a back-door feed after being left uncovered. For Shine, it was his seventh of the season and second-straight game with a goal, having lit the lamp in Tuesday’s GLI semi-final against Michigan.

“It was great, exciting to score in front my family and friends that were here,” Shine said.

Despite late pressure from the Wildcats, the Spartans held on to head to its second-straight overtime.

Off a broken play, Payne scored the overtime winner, burying a loose puck in the slot that took a bounce off a NMU skate and MSU stick before landing on his stick.

“I don’t know what happened on that face-off, but it came back to the guy in front of me, he just had a little kick at it and I just fired it in,” Payne said. “The goal was right in front of me, I just hit it and it went in, so a little lucky, but it was good.”

Notes: Michigan State is tied with Michigan Tech for the most third-place finishes in GLI history with at 11.