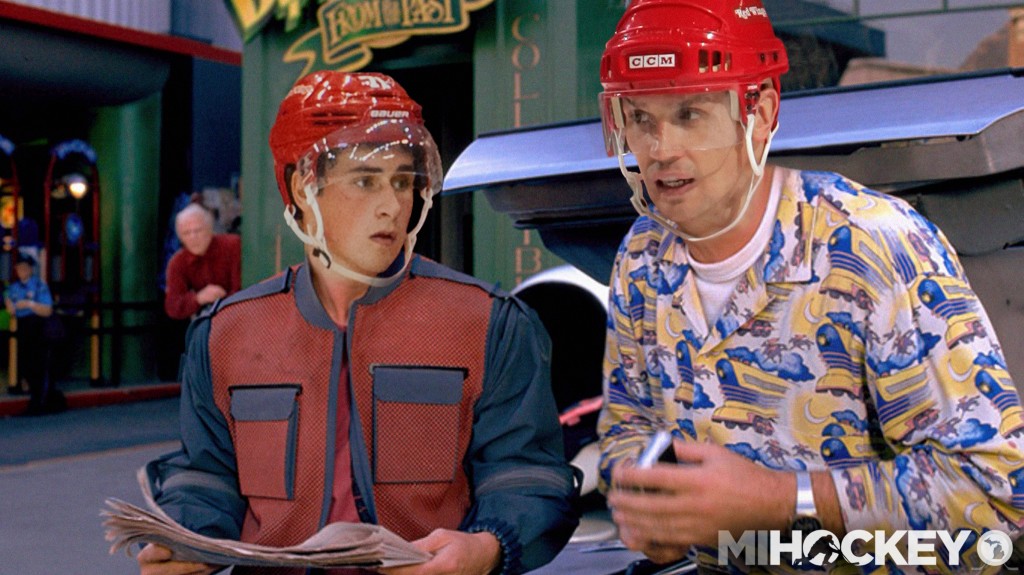 To celebrate the day that Doc Brown and Marty McFly officially arrived in the future during their iconic “Back To the Future Part II” feature film, we’re taking a look back at the year 1985, for a frame of reference on how things have changed in hockey.

Sure, we don’t have hoverboards or flying cars, but the game has advanced, that’s for sure.

Here are some ‘what things were like in 1985’s hockey world’ bits of information:

Now that you’ve got some perspective on how long ago that was – sorry to the names mentioned above, we’re not trying to make you feel old – it sure is fun to think about how the game has changed since.

When Gretzky was leading the Oilers to their second Stanley Cup, he was doing so with his iconic blue Jofa helmet and Titan wood stick. The Great One was still five years away from endorsing Easton’s fancy HXP 5100 aluminum stick, a product that revolutionized the hockey equipment industry.

In 1995, the composite blade was introduced, creating yet another game-changer for performance, durability and cost for a player’s twig (ironic that we still call it that, huh?). The Synergy, Easton’s first one-piece composite stick, didn’t hit stores until 15 years after McFly hopped in the DeLorean and started traveling through time (on the silver screen, of course).

Stick revolutions aside, hockey has been constantly improving due to technology – and in a “Back To the Future” tribute post, how could we not talk about it. Think about all the changes. We’ve got seamless glass, games being played outdoors in California and skates that weigh less than some sneakers. We’ve also seen some things that could be taken from deleted scenes from “Back To The Future” like the Fox glowpuck, the CCM X-Ray helmet and T-Blades.

No flying Zambonis just yet, but hey, that wouldn’t work very well, would it.

We wonder what Marty McFly would have thought of ‘today’s hockey world.’ It’s easy to assume he didn’t know too much about the sport, considering he grew up in Hill Valley, Calif. Sure, he had the Kings to watch growing up, but Gretzky didn’t show up in Tinseltown until McFly would be in college. We’ve got a feeling, however, that the oddball Doc Brown was a season ticket holder well before The Great One made hockey ‘cool’ out west.

So if McFly showed up in Cali today, he’d see an abundance of hockey. Three NHL teams, a growing youth hockey community, and you know, hockey fans in general. That would probably be pretty foreign to him, but it couldn’t be as weird as that holographic Jaws that tries to eat him.

We think he would really enjoy today’s game, too. It’s faster than his hoverboard, after all.

How could we not include this picture in this article?