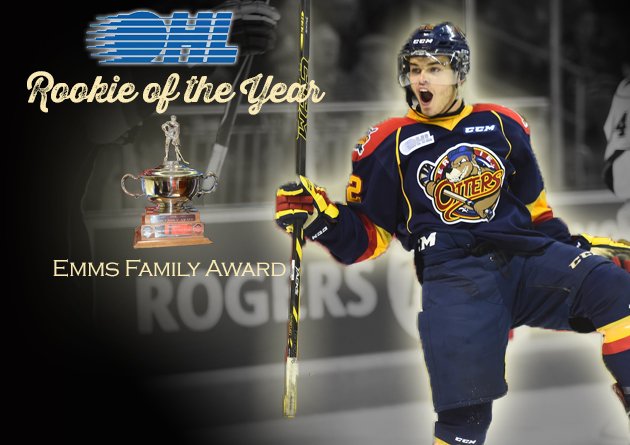 The Ontario Hockey League announced today that Farmington Hills native Alex DeBrincat is their league’s rookie of the year.

DeBrincat, 17, was officially announced as the 2014-15 recipient of the Emms Family Award just before 11 a.m. on the OHL’s official website and social media channels.

Skating alongside potential No. 1 overall draft pick Connor McDavid, DeBrincat held his own in his freshman season with the Erie Otters, racking up 51 goals and 53 assists for 104 points in just 68 games.

“It’s a great honor,” DeBrincat said on the OHL’s official site. “The guys who won it before me are part of an elite list of names, so it’s definitely a huge honor to accept this award.”

DeBrincat ranked No. 7 overall in the entire OHL with his 104 points.

“This is a special award for a special player, not to mention a great person,” said Otters general manager Sherry Bassin. “To win this award is not only an honor but you have to be an elite player. And for Alex to win this after being told he’s too small to play at this elite level, makes it that much more gratifying for him. The OHL and the hockey world now know that his heart is the biggest part of his body. The Otters are extremely excited for this special talent as he grows in this developmental league.”

DeBrincat joins an impressive and short list of under 18-year-old rookies to record 50 goals and 100 points, the others being fellow Michigan native David Legwand (Plymouth, 1998), Tony Tanti (Oshawa, 1981), Wayne Gretzky (Sault Ste. Marie, 1978) and Jack Valiquette (Sault Ste. Marie, 1974). All of those other players were named rookie of the year, as well.

DeBrincat will receive his Emms Family Award at the OHL’s annual Awards Ceremony at the the Hockey Hall of Fame on June 9.