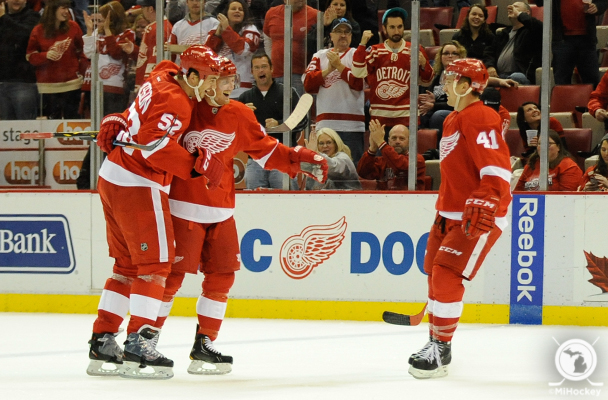 It might not always be at the forefront of the news, but behind the scenes, Red Wings players are helping support their community each and every day.

Check out the list of all the different ways the Red Wings’ roster is helping out both in Michigan and beyond during the 2014-15 season (from the RedWings.NHL.com Player Initiatives and Charities page):

52 for the Zoo – For every hit recorded by Jonathan Ericsson this season, he will donate $50 to the Detroit Zoological Society. This donation will fund a scholarship program to send underprivileged kids to an overnight experience at the Detroit Zoo in the summer.

Abby’s All Stars – Since 2012-13, Justin Abdelkader hosts one elementary student and his/her guardian at every Red Wings regular-season home game. The Red Wings randomly select a student who has submitted an entry form for the Red Wings for Reading program.

Andrej’s Awards – Andrej Nestrasil will provide a monetary donation to the foundation supporting his youth hockey club in the Czech Republic, Srdci Zustava, for every point he records at the NHL and AHL level.

Andy’s Avengers – Joakim Andersson will host one child with a muscular disorder or muscular dystrophy and his/her guardian at every Red Wings home game this season. The Detroit chapter of MDA will select the guest for each game.

Big Hearts Mini Monsters – Jonas Gustavsson will host a child with a congenital heart defect at each home game with a pair of donated upper bowl season tickets. Guests will be selected for 35 games by Hearts of Hope Michigan and for 10 games by Cardiac Kids in Toronto.

Brendan Smith: Breast Cancer Awareness Night Spokesperson – Brendan Smith is the team spokesman for Breast Cancer Awareness Night. He participates in the on-ice check presentation prior to the game and donates his two lower-bowl tickets and a meet and greet for the concourse auction. He also donated a 20-person suite for two-time breast cancer survivors for the 2014 BCA Night game. They were treated to complimentary food and beverages along with goody bags and a post-game meet and greet.

Brian’s Beats – Brian Lashoff will donate $50 for every hit he records this season. The funds will benefit Freedom Hill Foundation to pay for donated musical instruments and music therapy to military veterans at the John D. Dingell VA Medical Center in Detroit.

DeKeyser’s Hometown Heroes – Danny DeKeyser will host a military member (active or retired) and a guest at every Red Wings home game this season. Tickets will be donated through the Detroit Red Wings Foundation to individual military members.
14’s Friends – Gustav Nyquist hosted families staying at Ronald McDonald House Detroit and Ann Arbor (10 guests from each house) in a suite on Nov. 9. Families were selected by the respective Ronald McDonald House.

Franzen’s Friends – Since 2013-14, Johan Franzen hosts a Special Olympics athlete and his/her guardian at every Red Wings home game. Special Olympics of Michigan selects the athlete for each game.

Gametime with Glendening – Luke Glendening will host a child with Down syndrome and his/her family at every Red Wings home game this season and will meet the family after the game. Two nonprofits (Down Syndrome Guild of Southeast Michigan and Down Syndrome Support Group) will equally split the games and select the guests for each game.

Helm’s Heroes – Darren Helm will host a youth hockey player with a medical condition and his/her guardian at every Red Wings home game this season with two donated tickets through the Detroit Red Wings Foundation.

Henrik Zetterberg: Smoke Detector Collection Spokesman – Each year, the Red Wings ask fans to donate smoke detectors and make monetary donations at two preseason games to support the annual Smoke Detector Collection. Since 2005-06, Henrik Zetterberg has been the team spokesman for the initiative that has distributed more than 28,000 smoke detectors since 2001. The Zetterberg Foundation matches the fans’ donations and the Detroit Red Wings Foundation uses the matching donation to purchase additional smoke detectors that are distributed to Michigan fire departments.

Kindl’s Krew – Since 2013-14, Jakub Kindl hosts an adult cancer patient or survivor at Karmanos Cancer Institute and his/her guest at every Red Wings home game. Karmanos selects the guest for each game.

Kronner’s Corner – Since 2012-13, Niklas Kronwall hosts a family with an autistic child at every Red Wings home game. Autism Alliance of Michigan selects the family for each game.

Pav’s Pals – Since 2012-13, Pavel Datsyuk hosts a family through Henry Ford’s SandCastles program at every Red Wings home game. The family has recently suffered the loss of a parent. SandCastles selects the family for each game.

Riley’s Rescues – Riley Sheahan will donate $100 for every point he records during the 2014-15 season to the Michigan Humane Society’s emergency rescue program. He will also visit the Detroit MHS location once a month to take a photo with a pet available for adoption that the Red Wings will post on our social platforms. The person who adopts that particular pet will receive a goody bag from the Wings with an autographed 8×10 photo of Sheahan.

Tatar’s Totes – Tomas Tatar will donate $100 per point during the 2014-15 season to the Gleaners Community Food Bank’s BackPack Program. Their BackPack Program sends a bag with six meals home with hungry elementary students.

26 Fights Homelessness – Tomas Jurco will donate $100 per goal during the 2014-15 season to Coalition on Temporary Shelter (COTS). COTS provides emergency shelter, transitional housing, as well as comprehensive support services for the homeless and at-risk population.

Weiss’ Warriors – Stephen Weiss will host a pediatric cancer patient and his/her family in a 20-person suite at three separate games during the season. He will donate one suite each to Gilda’s Club, Wigs 4 Kids and Children’s Leukemia Foundation of Michigan. He will meet his guests after each game.