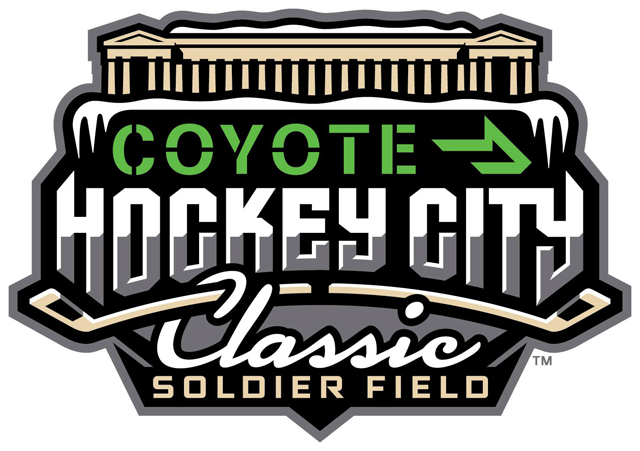 By Michael Caples and Alyssa Girardi –

This February, three of Michigan’s biggest college hockey programs will playing outside – in Chicago.

Michigan and Michigan State will renew their in-state rivalry, while Western Michigan and Miami (Ohio) will also compete at the Coyote ‘Hockey City Classic’ at Soldier Field in Chicago on Feb. 7, 2015.

It will be the second straight season the three teams will participate in an outdoor game. Last season’s Great Lakes Invitational took place at Comerica Park in Detroit as part of the Hockeytown Winter Festival, with Western taking the title against Michigan Tech and Michigan State defeating Michigan in the third-place game.

It will be the fourth time Michigan and Michigan State take on one another in an outdoor hockey contest. The Hockey City Classic will also be the second outdoor appearance for the Broncos.

It will be the second time the Hockey City Classic takes place at Soldier Field – the first of which took place in 2013, attracting more than 52,000 fans with games featuring Notre Dame vs. Miami and Minnesota vs. Wisconsin. The event is organized by Intersport, a Chicago-based sports and entertainment marketing agency, and is sponsored by Coyote Logistics. The Coyote name may be familiar to the youth hockey market; they sponsor the Chicago Mission Tier I hockey program.

“For nearly 30 years, Intersport’s heritage has been creating unique experiences that engage passionate audiences,” said Drew Russell, Vice President of Properties for Intersport. “We are dedicated to the art of developing experiences like this fantastic collegiate outdoor hockey doubleheader. Coyote is a fanatical supporter of Chicago, its local community, employees and student-athletes across the country.”

“This is an incredible opportunity for our program to participate in one of college hockey’s premier events of the season,” MSU head coach Tom Anastos said. “The combination of a world-class city, historic stadium, a great hockey market and college hockey’s longest rivalry between the two schools that started this outdoor game phenomenon, makes for an experience of a lifetime for our student-athletes. We could not be more excited.”

“We are pleased to be a part of the Hockey City Classic this season in its return to Soldier Field and the city of Chicago,” said head coach Red Berenson. “It will be exciting for our players and our loyal Michigan Hockey fans to witness this historic outdoor game with all-important Big Ten points on the line.”

“It’s an important game first and foremost because it’s a conference game and points are on the line,” said Broncos head coach Andy Murray. “But to play at such a historic venue like Soldier Field after the thrill of playing at Comerica Park last season, the team is really excited about it and we know our fans will come out in masses for the game.”

“This is a great opportunity for us to play in such a historic stadium in a city with a lot of both Miami University alumni and Miami Hockey alumni,” said Miami head coach Enrico Blasi. “We are grateful for the opportunity and look forward to playing one of our big rivals in Western Michigan. This was a tremendous experience for us two years ago and we are happy to return in February.”

Tickets for the Hockey City Classic will be available to the general public starting in October.

Proud to announce we will be playing outdoors at Solider Field as a part of the Coyote Logistics @HkyCityClassic http://t.co/cFQxzEt9rN