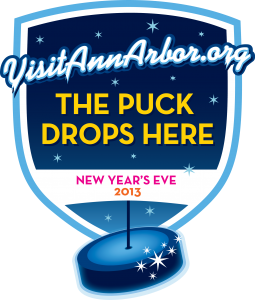 The Ann Arbor Area Convention and Visitors Bureau has announced that they will hold a New Year’s Eve street party in downtown Ann Arbor that will celebrate the upcoming NHL Winter Classic.

Six hours of live entertainment and a midnight puck drop (yes, a giant hockey puck) highlight the city’s “The Puck Drops Here” party to kick off the new year. Festivities will begin at 8 p.m., and run through 2 a.m.

Michigan-based design and fabrication studio METAL is constructing the puck to drop at the stroke of midnight. A lighting ceremony will take place at 8 p.m. to kick off the fun.

“In keeping with the theme of the event, we will actually be lowering a 10-foot puck lit with 6,000 LED lights,” says METAL visionary John Walters via a release.

Michelle Chamuel, star of NBC’s “The Voice” and former Ann Arbor resident, will be the headlining musical act for the downtown celebration. Chamuel will be performing with Tyler Duncan and their band, S/He. Other performances will include DJs Robert Lux, Ross Federman, DJ Scout and live drumming from Mike Shea.

Matt Altruda, host of the Tree Town Sound on Ann Arbor’s 107.1 will be the master of ceremonies.

“We are very excited to welcome our out-of-town visitors, as well as members of our local community, to bring in the New Year with us,” says AAACVB President and CEO, Mary Kerr. “With the 2014 Bridgestone NHL Winter Classic coming to Michigan Stadium, this is a great opportunity for us to share all that the area has to offer, including an electric downtown corridor, with an international audience.”