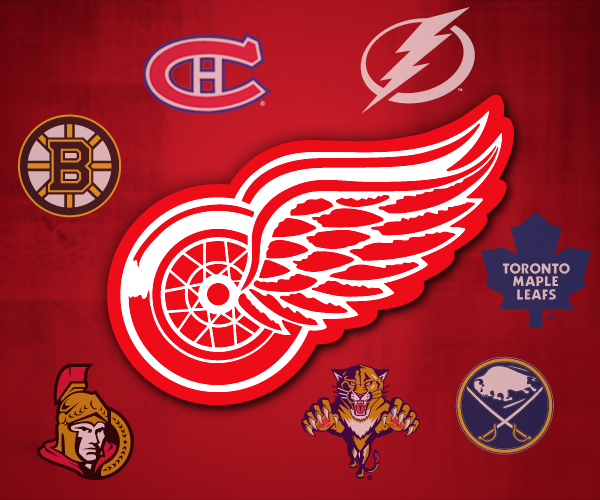 The Red Wings’ 2013-14 schedule was finally released today. Here are some of the games we’re especially excited for next fall:

Oct. 2 vs. Buffalo – The Red Wings open up the 2013-14 regular season with a home game against new division foe Buffalo. Time to get to know Ryan Miller all over again, everybody.

Oct. 5 at Boston – The Wings’ first Original Six road contest against a new division foe will be with the defending Eastern Conference champions – and a game against Torey Krug (if he makes the squad, of course).

Oct. 30 at Vancouver – Staying up late will actually be fun now, right? The Red Wings make one visit to Vancouver this season, which means only one time where we have to stay up late to watch them.

Nov. 4 at Winnipeg – The Red Wings return to Winnipeg for the first time since knocking the old Jets out of the playoffs in 1996. Wonder if the people of Winnipeg have come to terms with that yet?

Nov. 9 vs. Tampa Bay – The Hockeytown faithful are rather familiar with the Lightning’s GM, but it’s time to prepare for seeing Steven Stamkos and the Bolts more frequently.

Nov. 15 vs. Washington – Alex Ovechkin makes his first appearance in Detroit since 2012.

Nov. 27 vs. Boston – Let’s see, it’s Thanksgiving Eve, and it’s the Boston Bruins coming to town. Recipe for success? I think so.

Nov. 29 at New York (Islanders) – Get your Black Friday shopping done in time for an afternoon contest between the Red Wings and Islanders out in New York.

Dec. 14 vs. Pittsburgh – Sidney Crosby and the Penguins come to town. Still don’t think they’re a welcomed bunch in Hockeytown.

Dec. 21 at Toronto – In the lone preview of the Winter Classic match-up, the Red Wings head up to Toronto for a date with the Leafs – and with the HBO cameras following them around.

Jan. 1 – Outdoor hockey returns to Michigan Stadium. Doesn’t get much bigger than Wings vs. Leafs in front of 100,000-plus.

Jan. 22 vs. Chicago – The one Original Six rivalry dampened by realignment heats back up at Joe Louis Arena.

Feb. 3 vs. Vancouver – Ryan Kesler, David Booth and the Vancouver Canucks come to town. Last time they were here, the Red Wings scored eight on ‘em.

Mar. 7 vs. New Jersey – Martin Brodeur plays his last game against the Detroit Red Wings – and we get one last chance to see him play in person.

Mar. 16 at Chicago – The Wings return to the Madhouse on Madison for their one road game with the Blackhawks in the 2013-14 season.

Mar. 18 vs. Toronto – Maple Leafs return to town – this time, they will play it inside.

Apr. 2 vs. Boston – In the home stretch, the Wings welcome the Bruins to Hockeytown, with the possibility of the points on the line being crucial to both squads.

Apr. 5 at Montreal – Seven days out from their final regular-season contest, the Red Wings head up to Montreal for a date with the Canadiens.

Apr. 13 at St. Louis – The Red Wings conclude the 2013-14 regular season with a team that they are very, very familiar with, but won’t see too much of in the coming years.