Editor's picks For Coaches For Fans For Parents For Players Pro Red Wings Slideshow The Latest
March 29, 2013May 8, 2013 MiHockey Staff 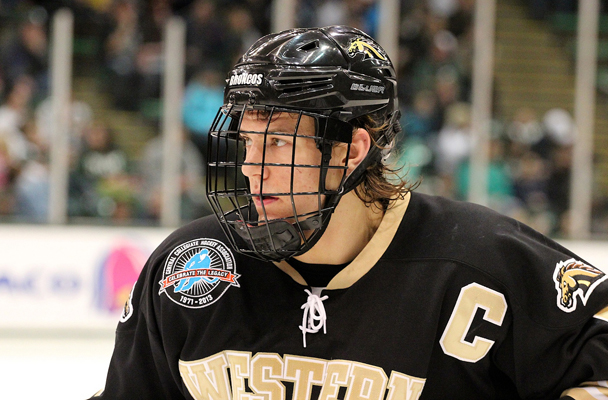 It appears as one of the most prized college free agents is off the market, and that he’s staying in Michigan.

Danny DeKeyser, a highly-touted free agent defenseman out of Western Michigan, has signed with the Detroit Red Wings – his hometown team.

The news was first broken by TSN’s Bob McKenzie and later confirmed by the Red Wings.

DeKeyser, a Clay Township, Mich., native, will forego his senior season with the Broncos to advance to the pro ranks.

The anchor of the Broncos’ back-end took home Best Defensive Defenseman honors for the second straight season at the CCHA Awards show on March 22. DeKeyser edged out Bowling Green’s Bobby Shea and Miami’s Steven Spinell to earn the honor in back-to-back seasons. The 6-foot-3 junior defenseman recorded 12 points in only 27 games this season from the back-end due to injury, but he was also named to the CCHA All-Conference First Team.

DeKeyser finishes his CCHA career having scored 12 goals and 37 assists for 49 points with the Broncos. He played to a career +23 over 118 games, while racking up 107 penalty minutes.

The Red Wings confirmed the news via this press release:

Detroit, MI… Detroit Red Wings Executive Vice President and General Manager Ken Holland today announced that the club has agreed to terms with free agent defenseman Dan DeKeyser on a two-year contract. In accordance with team policy, additional terms of the deal were not disclosed.

DeKeyser, 23, spent the past three seasons patrolling the blue line at Western Michigan University of the Central Collegiate Hockey Association. During his freshman campaign in 2010-11, DeKeyser posted 17 points (5-12-17) in 42 games, led the Broncos with 54 blocked shots and was named to the CCHA All-Rookie Team. The 6-3, 198-lb. defenseman played his first year at Western Michigan under current Grand Rapids Griffins head coach and former Red Wings assistant coach, Jeff Blashill.

DeKeyser played his sophomore and junior seasons under the tutelage of former National Hockey League bench boss Andy Murray. In 2011-12, his second season at Western Michigan, the Clay Township, Mich., native skated in 41 games, collecting 17 points (5-12-17) and 42 penalty minutes. He was selected as the CCHA’s best defensive defenseman and named a Second Team All-American. This past season, DeKeyser appeared in 35 games for the Broncos, notching 15 points (2-13-15) and finishing second on the team with 56 blocked shots. He was a CCHA All-Conference First Team selection as voted on by the 11 CCHA head coaches and was also honored as the CCHA’s best defensive defenseman for the second consecutive season.

2 thoughts on “Report: Dan DeKeyser has signed with the Red Wings”