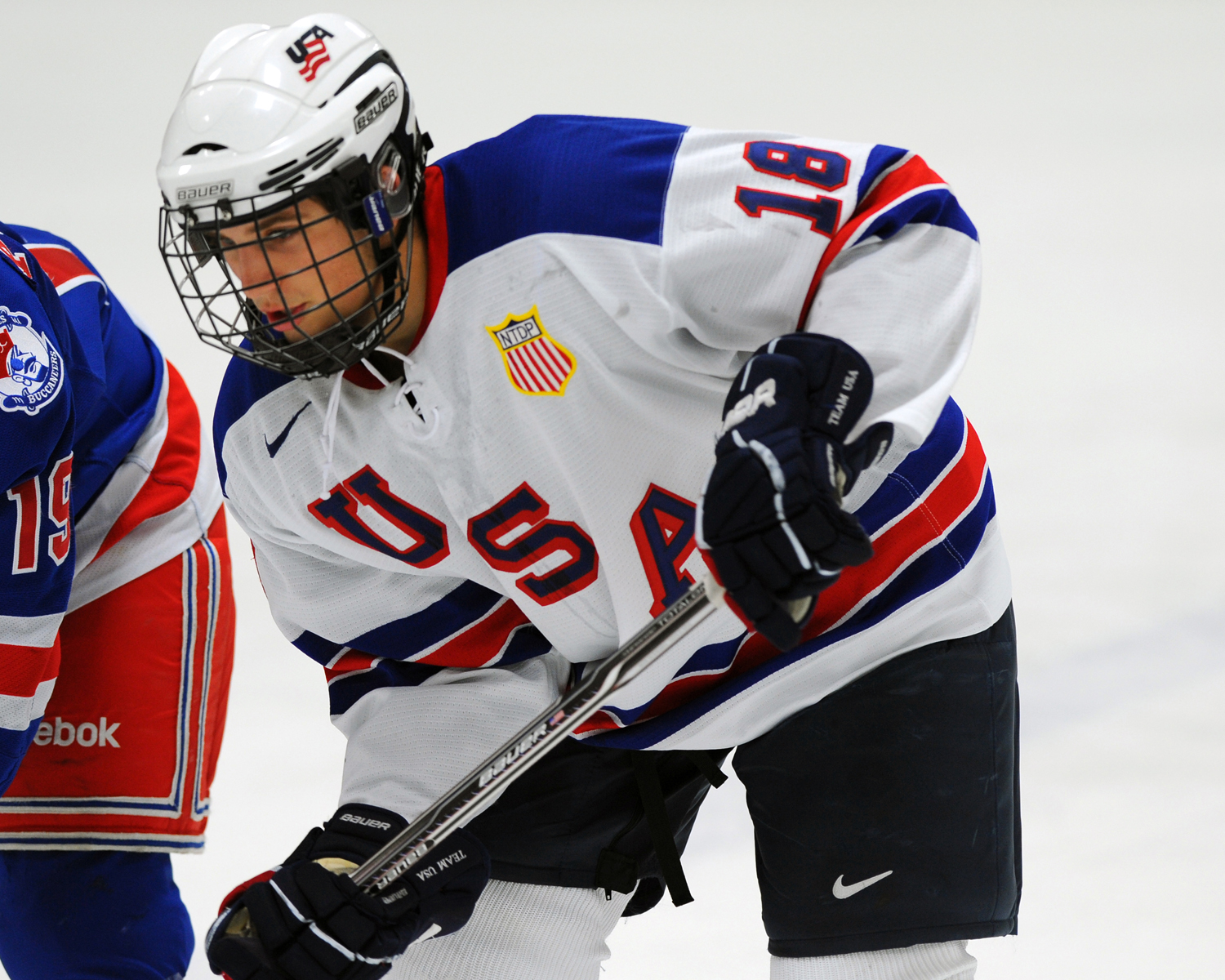 Plymouth Whalers forward Ryan Hartman, who played for the US NTDP last season, is one of the many Michigan connections on NHL Central Scouting's players to watch list for the 2013 draft. (Photo by Tom Sorensen/USA Hockey)
Flint Firebirds For Fans Juniors
May 24, 2012June 18, 2012 MiHockey Staff 878 Views NHL, NTDP, Plymouth Whalers, Ryan Hartman

When Ryan Hartman was drafted by the Plymouth Whalers in the 2010 Ontario Hockey League draft, he had already committed to the U.S. National Team Development Program, along with Miami University three years down the road.

Still, the Whalers felt a fifth-round choice was worth the gamble and earlier this month, it paid off as Hartman reneged on his NCAA commitment to the RedHawks and signed with Plymouth.

“Because of my birthday (Sept. 20), I would have had that extra year before going to college and I sat down with my family and we really looked at the pros and cons of coming to Plymouth or going a different route,” said Hartman, a 17-year-old forward from the Chicago suburb of West Dundee. “I really wanted it to be a family decision and in the end, we decided that the OHL would be the best option to develop and prepare for my (NHL) draft year. My goal is obviously to play in the NHL and not just a few games just so I can say I made it. I want to get to the NHL and stay in the NHL.

“It was a tough phone call to (Miami head coach Enrico Blasi) and I procrastinated for a few days, and he was disappointed, but I think realized in the end that it was a business decision and was done in the best interests for my future.”

Last season in Ann Arbor with the Under-18 team, Hartman finished second in team scoring with 16 goals and 41 points with 136 penalty minutes in 59 games.  He scored two goals with four assists for six points for the gold-medal winning United States team in this spring’s World Under-18 Championship.

Hartman played for the NTDP Under-17 program in 2010-11, scoring 22 goals with 12 assists for 34 points and 88 penalty minutes in 52 games. The Whalers originally drafted Hartman out of the Chicago Mission AAA program, where he scored 25 goals in 2009-10.

The offensive numbers aside, Hartman said he patterns his game after St. Louis Blues’ captain David Backes and likes to play physical.

“This year in Plymouth, I want to be an impact player,” boasted Hartman. “I’ve learned that if you play physical enough, the plays will come. If you give a big hit, the puck usually finds a way to your stick. Once I made the NTDP, I kind of started to realize that I could make a career out of hockey. My dad used to ask me all the time if I could see myself doing this my whole life and I would always say, ‘Absolutely.’”

The fact the Whalers are an American-based team also helped in Hartman’s decision to play in the OHL, though he admitted he didn’t know a whole lot about the team and league until the last year or so.

“I had a good chance to see the arena when I was with the Mission and we’d come up here to play Compuware,” said Hartman. “My dad knew some things about the organization and when Plymouth drafted me, I kind of kept coming here in the back of my mind. If any other team had drafted me, I would have looked at those teams, but being that Plymouth isn’t too far from Chicago, my family can come watch me play, so that will be a good situation for me.

“The Whalers have great coaching, great players who have really welcomed me, and such a great facility. This is really where I want to be.”

And it’s not as if Hartman is joining the team as a stranger. Second-year forward Danny Vanderwiel is from Hartman’s hometown and Tom Wilson, a forward who may hear his name called in the first round of next June’s NHL draft, has kept in touch with Hartman for the better part of the last two years.

“I played against Wilson in the World Under-17 gold medal game (in 2011) and he would call now and then and ask me if Plymouth was ever an option,” said Hartman. “He basically told me all about the organization and how he felt I’d be a good fit.”

Another current Whaler, forward J.T. Miller, played two seasons with the NTDP from 2009-11 and had a scholarship offer to North Dakota, but after getting drafted by the New York Rangers in the first round last June, he signed and later reported to Plymouth.

“Seeing the kind of year J.T. had stayed in my mind, too, when I was looking at coming to Plymouth,” Hartman said. “The only difference he and I had is that he would have gone to college straight from the NTDP and I would have had to wait a year. I know J.T. a little bit, but not much. If I saw him at the rink, we’d talk and stuff like that.”

Miller, being that he was drafted out of the NTDP and not juniors, has the option to start his pro career this fall.

With the summer fast approaching, Hartman has the next few months planned out leading up to training camp in Plymouth at the end of August.

“Once the school year ends, I’m going down to South Carolina for a two-week break just to get away from everything,” explained Hartman. “Then I’ll be going up to the Minnesota Hockey Camps. I went there for the first time last year and the staff there really helped me get into shape and stay in shape. I’m also hoping for invites to the NHL research, development and orientation camp and the U.S. World Junior camp, so we’ll see.
“I just want to be on the ice as much as I can and get ready for what I hope will be an impact year with Plymouth.”